Kanelsnegle or cinnamon snails are the Danish iterations of the cinnamon bun. There are two main types, bløddejs (soft dough) and wienerbrødsdej (pastry dough). They are filled with a delicious cinnamon filling and topped with a sugar glazing. 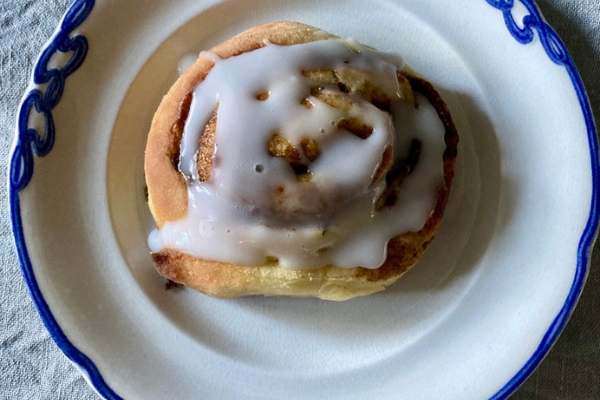 Kanelsnegle are loved by young and old. Both the soft dough and pastry dough versions are treats the Danes enjoy year-round.

When Danes bake kanelsnegle at home, it’s typically with a soft yeast dough. Only the more adventurous home bakers are interested in dealing with making a wienerbrødsdej from scratch.

Kanelsnegle are mainly a coffee treat. Something Danes have mid-morning or mid-afternoon. Occasionally, they’re served as part of a breakfast spread along with other kinds of wienerbrød.

In Northern Jutland, kanelsnegle are referred to as jødekager, jew cakes. It’s not offensive, I promise, you can read about it in this recipe for Danish Jødekager, the Christmas cookie most Danes now associate with the name.

The History and Variations of Kanelsnegle

Kanelsnegle seem to stem from Sweden, where all cinnamon buns have their roots.

In the early 20th century, Sweden became self-sufficient with flour and sugar, which meant these ingredients got cheaper and home bakers everywhere began experimenting more with their baked goods.

Ikea made the Swedish kanelbullar world famous. These soft dough cinnamon snails are so loved in Sweden, that they have a day dedicated to them, October 4th. Just like Lucia boller, which are served on December 13th.

It’s unclear when kanelsnegle made their way to Denmark and the rest of the world. 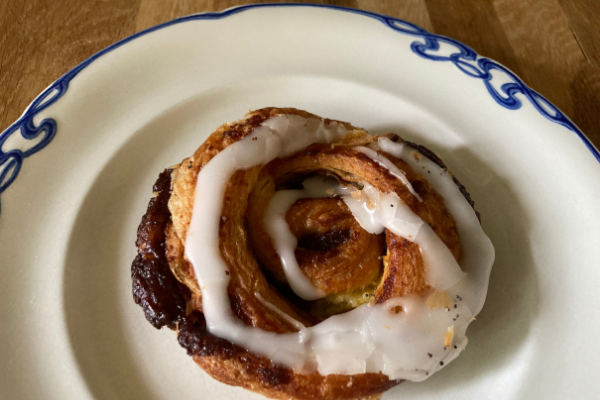 In 1988, however, a new phenomenon saw the light of day in Denmark.

Onsdagssneglen (the Wednesday Snail), a slightly bigger soft dough snail was made. In the beginning, it was only made on Wednesdays at bakeries. It was made popular in the 90s as it was enjoyed while watching soccer games on TV.

Today, you can buy an onsdagssnegl every day of the week but most bakeries still have them on offer for a lower price on Wednesdays.

Furthermore, some Danes also have an affinity for the so-called direktørsnegl, best translated as the CEO’s snail.

This type of kanelsnegl is often made with a different type of dough, filled with a creme filling as well as the cinnamon filling, and topped with melted chocolate. I, personally, find it way too rich and view it as an entirely different pastry than the more traditional types of kanelsnegle.

There are a couple of different ways to fold the dough, depending on your personal preference and if you’re using yeast or pastry dough.

The traditional snail form often leaks out a lot of goodness but is always used for pastry dough.

Inspired by the Swedish kanelbullar, many Danes now experiment with the fanciful turning of the dough to keep as much of the cinnamon filling inside the treat. 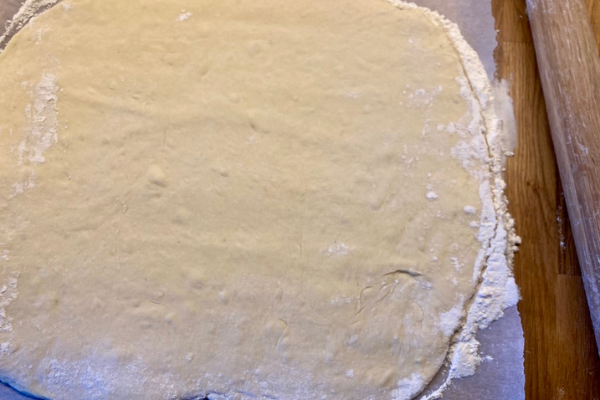 Spread the filling evenly on the dough. Leave about ½ inch (1.5cm) at the top without any filling on it. 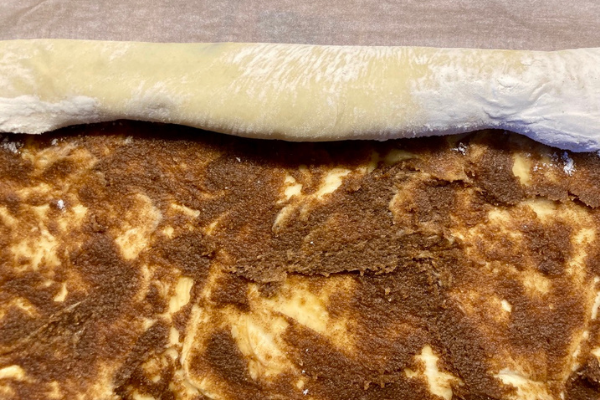 Rolling the dough can be fiddly. 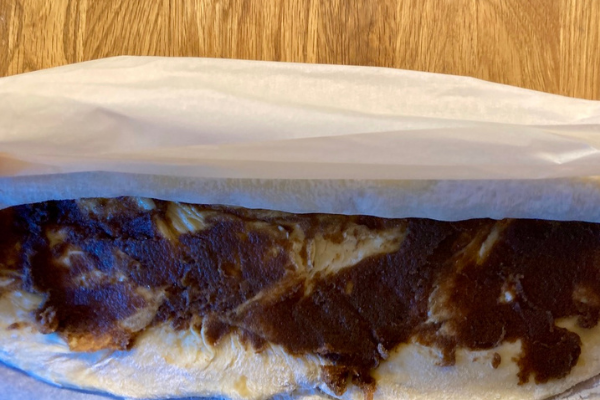 Place them in individual paper cups or on parchment paper to be baked. 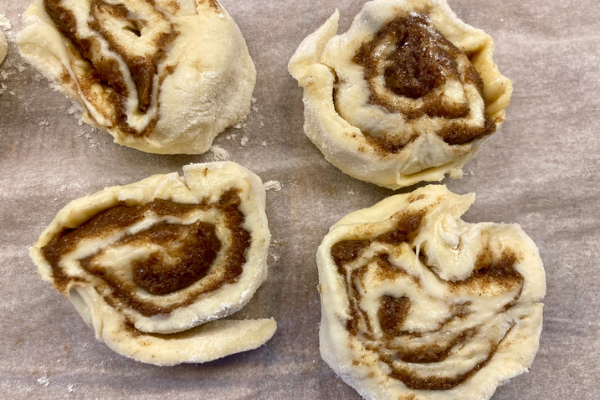 This type of kanelsnegl is also called a kanelsnurre.

There are various techniques you can use to form a kanelsnurre. You can pre-twist the dough before folding it but you don’t have to. 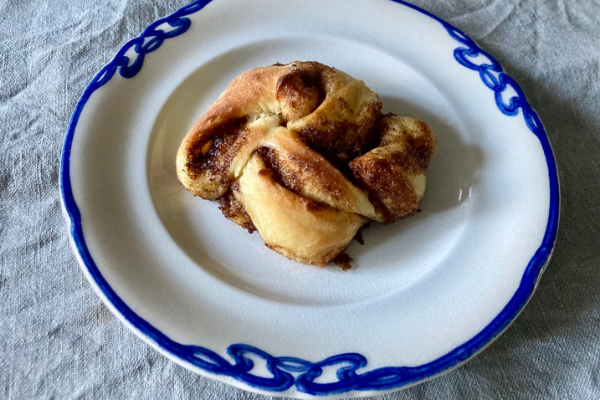 Here’s one of the easier methods:

Roll out the dough into a rectangle of roughly 16×10 inches (40×25 cm). Spread the filling evenly over the entire dough. Fold the top third of the dough over so only one-third is left with the filling exposed.

Then fold the bottom third over so there’s no longer any exposed filling. Cut the dough into ½ inch (1.5 cm) thick strips.

It’s difficult to explain with words how to make a kanelsnurre. It will make more sense if you see someone doing it at the same time.

Butter – Real butter is key as it impacts the taste of finished kanelsnegle. Fresh, salted butter gives the best result.

Milk – Use whole milk, preferably organic. If you can’t get whole milk you can use skimmed milk and replace ¼ cup with cream to get a similar result. The fat content adds to the taste.

Yeast – You can use fresh yeast or dry yeast. The recipe calls for fresh yeast, so if you use dry yeast, please use the equivalent amount noted on the package.

Sugar – Any sugar will do. Kanelsnegle are typically made with white cane sugar. If you prefer a different kind, you can substitute it.

Eggs – Fresh farm eggs are to be preferred. Use the best you can get, and always bake with fresh eggs.

Flour – Use all-purpose or pastry flour. Make sure you aren’t using self-rising flour as you are adding yeast.

Brown sugar – Brown sugar adds flavour as well as colour. You can replace it with white sugar but it won’t give the same complexity in taste.

Cinnamon – Use the real stuff. Look for Cinnamomum verum or Ceylon cinnamon. Avoid Cassia cinnamon. Freshly ground is best, a freshly opened portion will do if you can’t grind your own.

Marzipan – Use real marzipan for the best result. The only ingredients should be almonds and sugar.

Powdered sugar – To make the glazing you will need powdered sugar. If you can’t find it, you can powder some white sugar by blitzing it in a food processor until it’s a fine powder.

Water – Use the best water you can. Filtered tap water works well. Always use cold water.

Kanelsnegle are made in three parts: the dough, the filling and the glazing. The dough recipe given here is a traditional Danish kanelsnegle dough.

For a result more like the Swedish kanelbullar, you could use the recipe given in The Nordic Cookbook, which is a wonderful resource for Nordic recipes. You can also add 1 tbsp of cardamom to the dough recipe given here.

Dough
Begin making the dough first by melting the butter and adding the milk to it. Let it come to finger temperature.

Then add the yeast and combine until there are no visible lumps of yeast left.

Mix the eggs together thoroughly and add them along with the sugar to the mixture.

Finally, add the flour and combine the mixture until you have a smooth dough.

Let the dough rise, covered by a moist cloth in a warm spot for 30 min.

While the dough rests you should make the filling.

Filling
Don’t over-mix the filling or it will separate while baking. It’s important that all ingredients are combined but do the least amount of mixing you can to reach that point.

Begin by mixing the marzipan (if you want to use it) with the brown sugar in a bowl until there are no clumps left.

Then add the soft butter and mix again until fully combined.

Finally, add the maple syrup and cinnamon and mix one last time until fully combined. 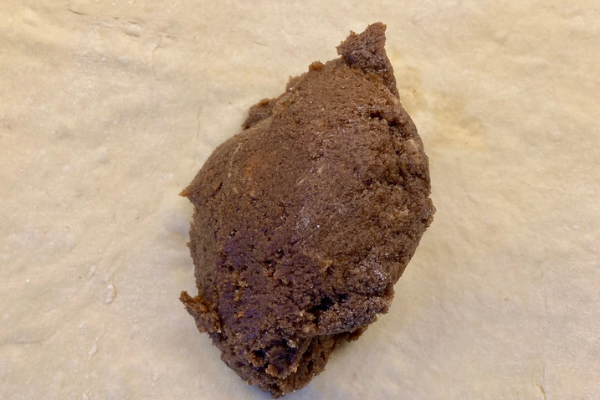 Once the dough is done resting, add the filling and use your preferred shaping method to create kanelsnegle or kanelsnurrer.

Place each kanelsnegl with good spacing on a lined baking tray and let them proof for 10 min. 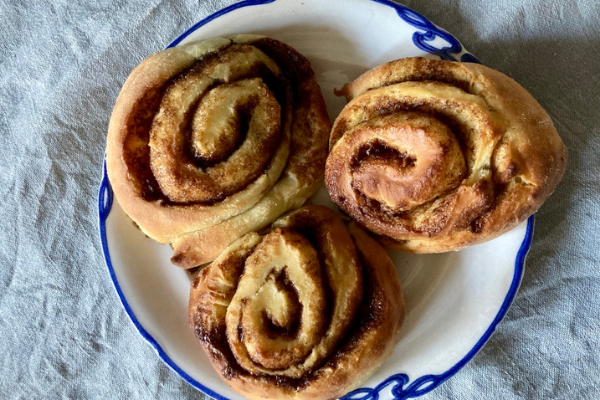 Let the kanelsnegle cool before glazing. You don’t typically glaze kanelsnurrer but you can if you’d like to.

Glazing
To make the glazing, mix powdered sugar with a tiny amount of water. Mix until fully combined.

Add more water or powdered sugar until you have a consistency that is smooth but not too runny.

Glaze the cooled kanelsnegle and let them sit until the glazing stiffens before serving them.

Only glaze as many as you plan to eat. Kanelsnegle store better without the glazing.

As kanelsnegle are made from a yeast dough they go stale quickly. You can freeze both unbaked and unglazed but baked kanelsnegle for several months.

If you freeze unbaked snegle, then defrost and proof them at room temperature for 10 min. before baking them.

Don’t over-mix the filling or it will separate while baking.

Kanelsnegle taste the best on the day they are made and should be eaten in a couple of days. You can freeze both baked and unbaked kanelsnegle for a couple of months.

Looking for other traditional Danish treats to serve with your kanelsnegle? Any of these would be great for a coffee time spread.

Cinnamon as the Christmas Spice