To call luciaboller or lussekatte Danish is a bit of a stretch. None the less, Danes love to eat them, willingly acknowledging their Swedish heritage. These saffron buns are deliciously golden, tasty, and filling. 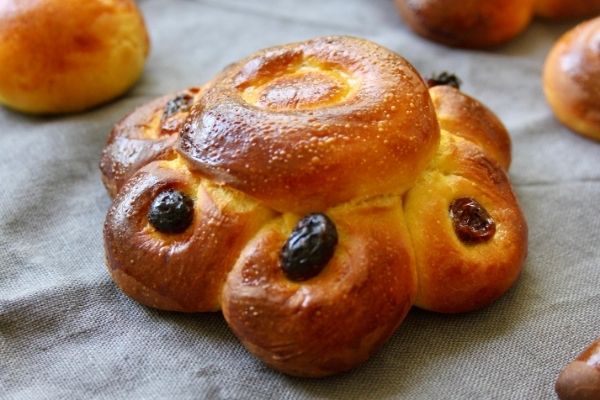 This post is written by Pia Sonne, a native of Denmark and the writer behind the blog Busy Hands, Quiet Hearts.

Danes eat luciaboller all throughout December but the proper time to eat them is on Lucia Day, December 13th.

These buns are popular in some families in Denmark while others have never heard of them. I married into a family where they are a stable at our gathering on the first advent Sunday. The ones served on this day are always made with saffron which doesn’t simply give the buns their golden colour but also impart a lot of flavour.

Don’t tell any cake snobs this, but between you and me, I prefer the kind made with turmeric. They are not only a good deal more affordable but also in my opinion tastier.

Many eat them as they are or halved with butter. They are by far the best when served warm. Because it’s a yeast dough, you need to eat them fairly quickly so they don’t go stale. 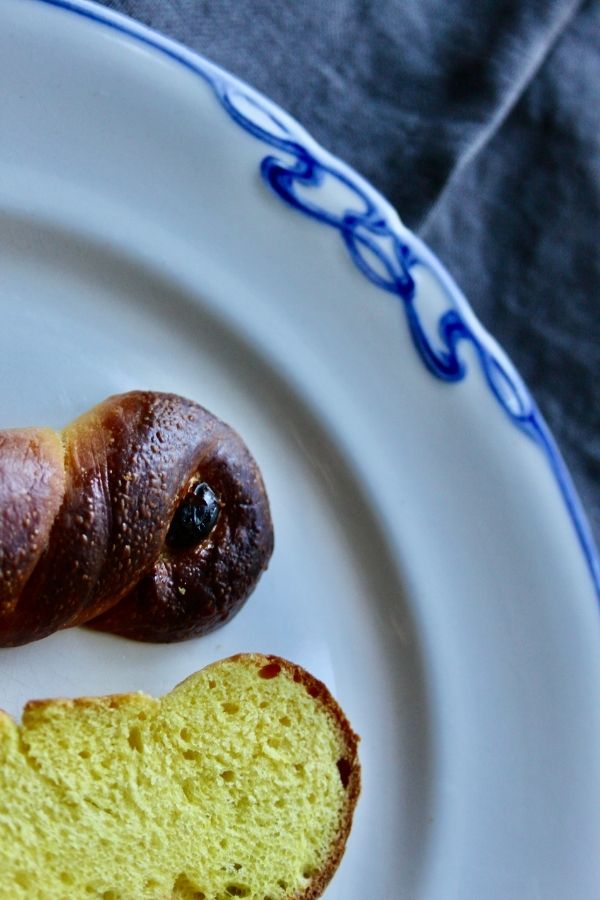 The history of luciaboller or lussekatte is deeply steeped in superstition and religion.

The traditional day to eat these buns is December 13th, which is considered to be the darkest night where the Devil comes. The buns are supposed to be reminiscent of Lucifer’s cat and the S-shape is supposed to look like a cat’s tail. It’s often called a julgalt in Swedish, a Christmas pig.

Whereas the Danish Luciaboller are clearly named after the catholic saint Lucia, it’s historically unclear if the Swedish lussekatte are named after Lucia or Lucifer.

Luciaboller are deeply intertwined with Lucia parades. Lucia was made a saint in the Catholic church and she is thought to bring light into the darkness. With her light she is pointing towards Christ and scares away Lucifer’s cats. Thus the X-shape is called a Christmas cross, a julekors in Danish and a gullvagn or julvagn in Swedish.

They are headed by a Lucia bride with a crown of lit candles on her head. She is followed by people with lit candles in their hands. All are dressed in white.

It’s a beautiful experience to see a Lucia parade walk slowly into a completely darkened room while they sing the traditional Lucia songs.

The reason these buns are made with saffron which makes them yellow is allegedly to scare the devil, who is afraid of light, away (Source).

The only truly specialty ingredient is Saffron, and this wildly expensive spice from the crocus plant is used to color and flavor the buns. It’s considered to be the world’s most expensive spice so if it’s not in your budget at over $5000/kg there’s a way cheaper alternative.

Turmeric will not give you the same taste but it will give you the color. It’s still very worth making these buns without the saffron.

Shapes – Besides the most popular S and X shapes covered above, there are other shapes with their own name and significance such as lindebarn, prästens hår and såkaka. These are not widely used in Denmark, as their name indicates, but are still in use in the Swedish tradition. Below you can see a small assortment of shapes and their Swedish names. 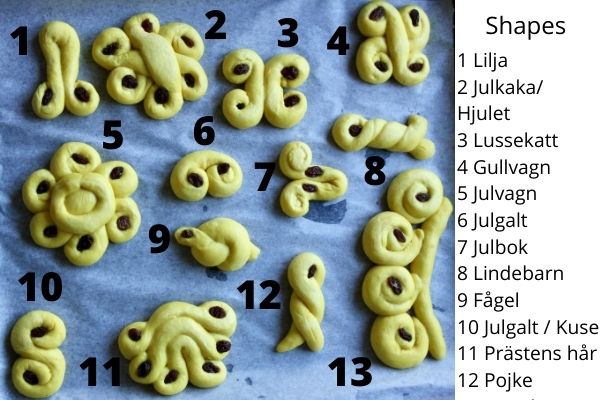 The main variation in luciaboller comes down to the great debate between the saffron purists and the Tumeric lovers. You know which camp I’m in.

Then there’s the ever dividing question of raisins or no raisins in baked goods. We are a household divided on this subject but luckily there’s traditionally only a couple of raisins in each luciabolle and they are easy to remove.

In Sweden, luciaboller are called lussekatter. In the western part of Sweden, they were called dövelskatter and dyvelkatter, literally devil cats.

They are served as a breakfast on December 13th, whereas Danes eat them as a coffee snack either midmorning or midafternoon.

Butter – Use real butter, fresh and organic is best.

Whole milk – This recipe is not worth making with skimmed milk. You want the fat in there. Fresh and organic is the way to go.

Saffron – If you’ve never had Luciaboller with saffron, you need to try it at least once. Make the cost worth it by sharing the loot with friends and family and turn it into a homeschool lesson for any little ones. Once you’ve tried it, feel free to substitute with tumeric and see which kind you like best.

Salt – If you can’t find fine salt in a quality you like, you can make your own by running larger salt chunks through a salt shaker or pounding it in a mortar.

Sugar – Use white sugar for the looks. If you leave the sugar out these buns do well as breadsticks.

Flour – Use a wheat flour and make sure it’s not self-rising. A fine flour, like a pizza flour is preferable. If you can find a Tipo 00 then use it. If you can’t find really fine flour then sift regular all-purpose flour for the best result.

Raisins –  Use jumbo raisins and soak them before baking to prevent dry, burnt raisins.

Yeast – You can use fresh yeast or dry yeast. 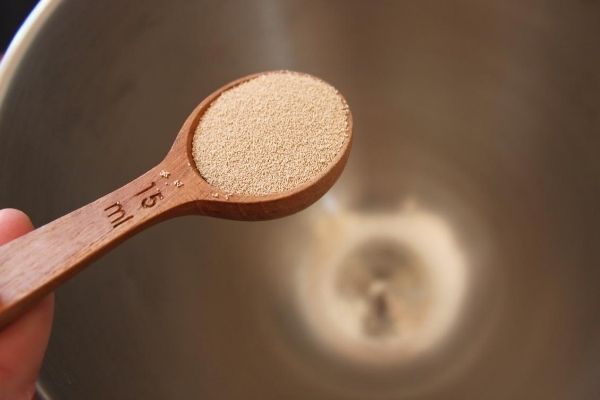 Begin by soaking the raisins in boiling water. Let them stay in the water while you do everything else.

Melt the butter and add the milk to it. Mix thoroughly and let it cool to hand warm. When it has cooled sufficiently, add the saffron or the tumeric if you want a cheaper option.

Put the yeast in a big bowl. Crumble the yeast if you are using fresh yeast. Add the hand warm mixture to the yeast and stir until it’s completely combined and activated. Depending on the yeast you may want to let it rest and activate for a few minutes.

Add salt, sugar, and the egg to the mixture and stir till it’s fully combined.

At this point, you are ready to add the flour. Do it slowly and only add a bit at a time. You want to add flour to the point where the dough no longer sticks to your hands and the bowl. Be careful not to work too much flour into the dough.

Shape the dough into a ball, place it in the bowl, paste it with melted butter and cover it with film. Let it rise to twice the size. This should take around 45-60 min. depending on your room temperature and your yeast.

Once the dough has doubled in size, beat it down on a floured table. Divide the dough into 0.88 oz (25 g) pieces. This is roughly equivalent to a heaping tbsp worth of dough. Don’t be tempted to make the pieces bigger. This dough rises a lot in the oven and too big of a luciabolle just isn’t very nice.

Let the pieces stay as balls until you need them to prevent the dough from drying out. Roll each piece to an 8 inch (20 cm) long roll. Shape the pieces into the shapes you like referencing the photo above.

The easiest shapes are julgrisen (S-shape) and julekorset (X-shape). You need one piece for julegrisen and two for julekorset. Add raisins to the pieces as shown on the photograph above.

As each piece is shaped, place it on your baking sheet. Let all the pieces rise to almost twice the size.

Once the pieces have risen, mix the egg yolk with 1 tbsp of water and paste it evenly onto all the pieces. 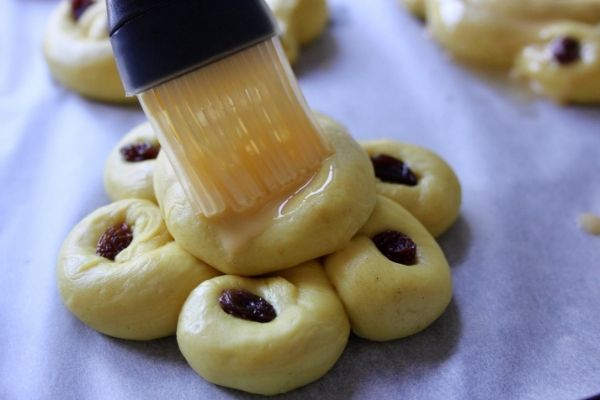 Luciaboller are best served still warm out of the oven. You can eat them as is, halved and covered with butter or with your favorite jam.

As with most yeast buns, luciaboller go stale quickly. A great way to remedy this is to freeze the remaining buns in smaller portions. You can defrost a portion and toast them in the oven for a quick feast. The buns stay good for about 3 months in the freezer.