Lohikeitto is a traditional salmon soup from Finland that comes together in less than 30 minutes.  The rich salmon flavor really comes through in this lightly seasoned nordic salmon soup.  With just a splash of cream, this soup is light enough for spring, but comforting enough for winter eating. 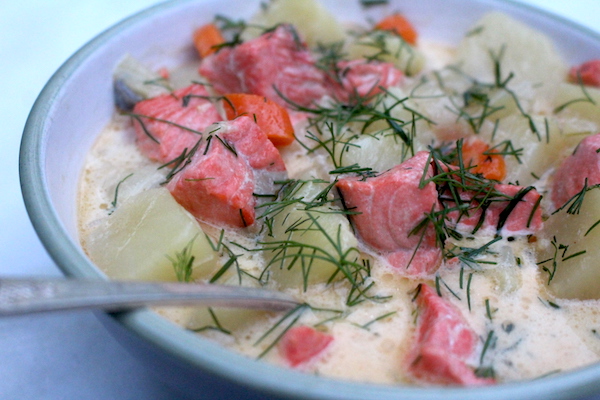 While American fish stews are all about thick heavy broths and white fish, this Finnish salmon soup is a refreshing change.  Made with salmon for a distinctive flavor, and finished with fresh dill, this isn’t your average fish chowder.

Most people don’t have fish stock on hand, and it can be tricky to find in stores.  Luckily, traditional Lohikeitto recipes actually use water instead of stock.  I know, it sounds strange, but that’s one of the things that keeps this salmon soup so light and clean.

I’ll be honest, my kids aren’t big fans of fish, but this soup won them over quickly.  My four-year-old daughter asks for it regularly, and it’s one of her very favorite meals. 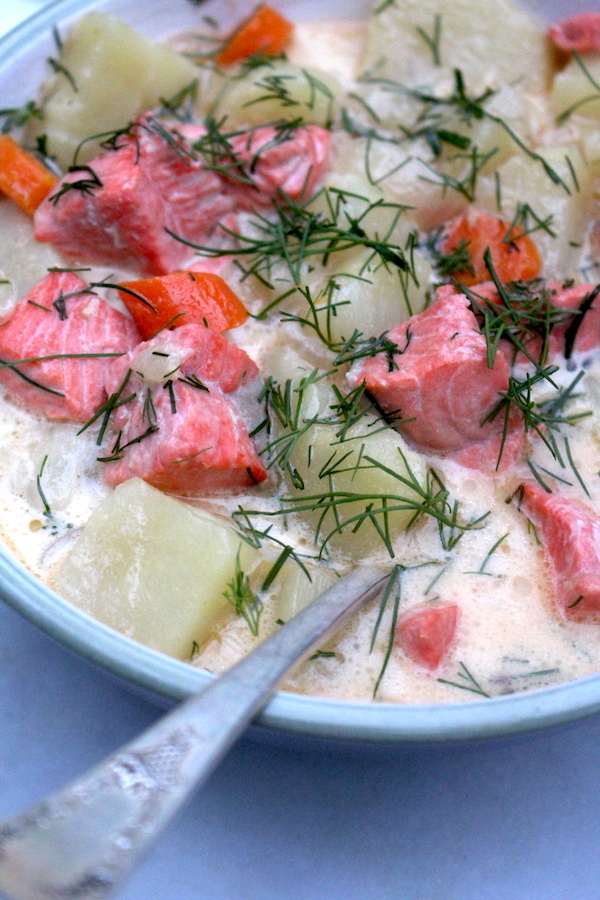 This particular preparation is most cherished and commonly eaten in Finland, but as with most nordic recipes, there’s a version of Lohikeitto in the other countries.

In Norway, it’s called laksesuppe which often has diced fennel and tomato, along with a tiny bit of sugar to round out the flavor.  Other spices like basil or paprika are not uncommon as well, making it a much more complex soup than the simple preparation of Finnish Lohikeitto.

The Danish version is laksesuppe, which can be made with tomato like the Norwegian version, or with celery, cabbage and a bit of curry powder.

In Sweeden, salmon soup is called laxsoppa, and it sometimes has greens like spinach included.  It also may be thickened with egg yolks and a bit of flour, resulting in a creamier soup.

Lohikeitto is simpler than these other Scandinavian salmon soups, and it only has a handful of ingredients. 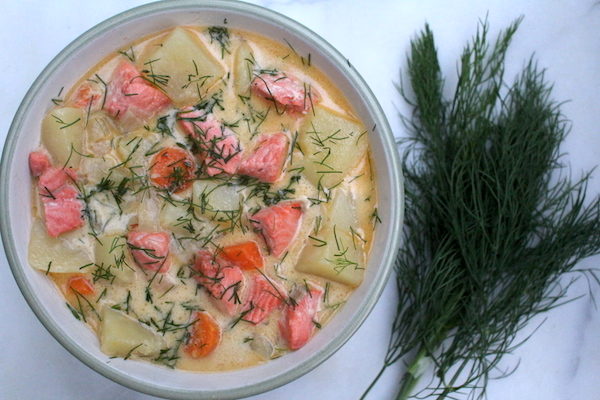 The ingredients for Lohikeitto are surprisingly simple.  It all starts with fresh salmon, and a lohikeitto recipe to serve 4 people has 1 to 1 1/4 pounds of fresh salmon.

Vegetable additions are also simple, and limited to potatoes, onions, and carrots.  We make this Finnish salmon soup several times a month, and these days I often add extra carrots because my kids are particularly fond of them.

This salmon soup remains unthickened, and it’s finished with a splash of cream and fresh dill.

Start by choosing a really nice salmon filet.  We’ve made lohikeitto a many, many times using various types of salmon.  We’ve tried with whole wild-caught filets, small cheap frozen farmed sections and even homemade gravlax in a pinch.

It’s always good, but truly fresh, wild-caught salmon really makes this soup.  The ingredients are simple, so they need to be high quality to make an exceptional salmon soup.

Place the diced vegetables into a stockpot or dutch oven, along with the dried spices and add water to cover.  If the salmon came with skin attached, use a filet knife to remove the skin and add that to the pot with the vegetables to infuse extra flavor into the broth.

Bring the vegetables to a simmer and cook until just tender, about 20 minutes.  Then turn off the heat.

This is important!  The salmon isn’t boiled in the soup, it’s just placed into the hot liquid to gently poach.  Stir the soup once after you’ve added the raw salmon chunks, but then cover and don’t stir again.  This will ensure that the salmon pieces don’t crumble apart into the soup.

Allow the salmon to poach in the hot liquid with the heat off for 3-5 minutes.

Serve lohikeitto into soup bowls, and finish with cream and fresh dill. 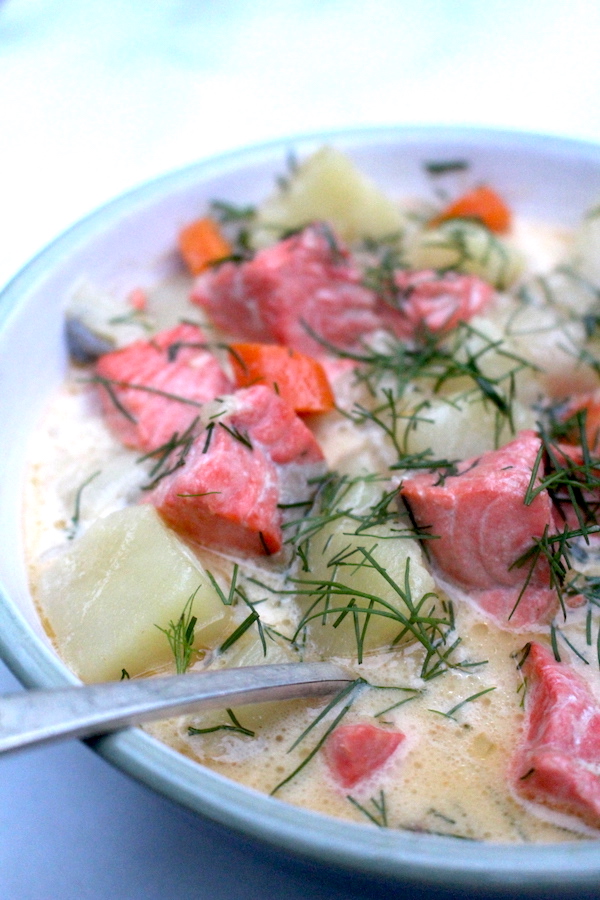 This soup is traditionally made with water, but for more flavor, a light chicken or fish stock is also lovely. 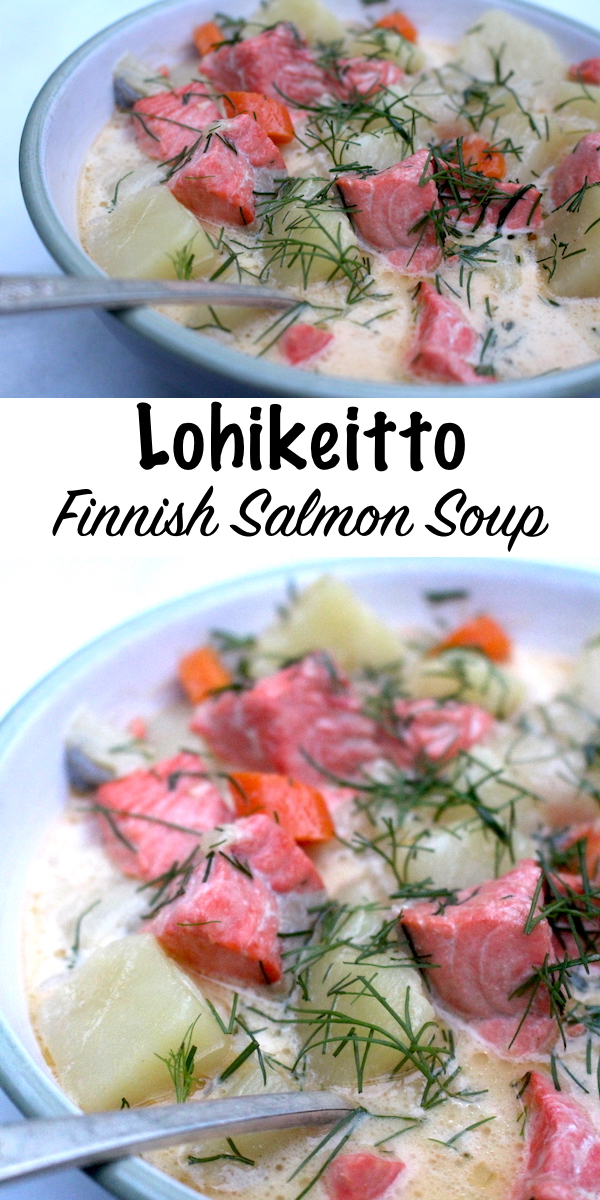