Yeasted banana bread is the perfect way to use up overripe bananas. Not too sweet, this fluffy white bread is perfect for sandwiches. 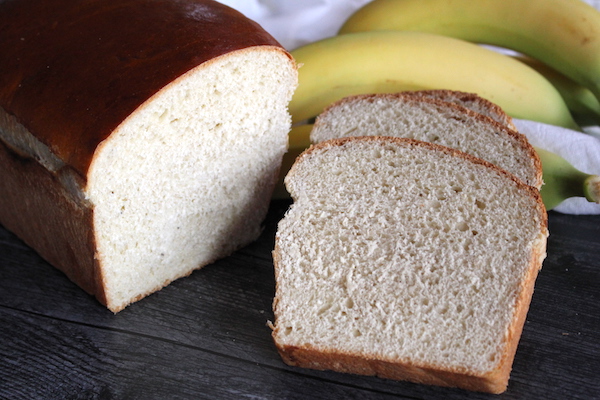 If you keep bananas in the house, it’ inevitable…you’ll eventually have an accidental bundle of banana bread worthy specimens browning on the counter.

Maple banana bread is my go-to solution, but these days with two little ones starting school, we’ve been going through sandwich bread like nobody’s business.  I’ve fallen in love with this honey wheat bread recipe, but life’s too short for the same bread every single day.

Time to test out some yeasted banana bread recipes…and this one’s a winner. 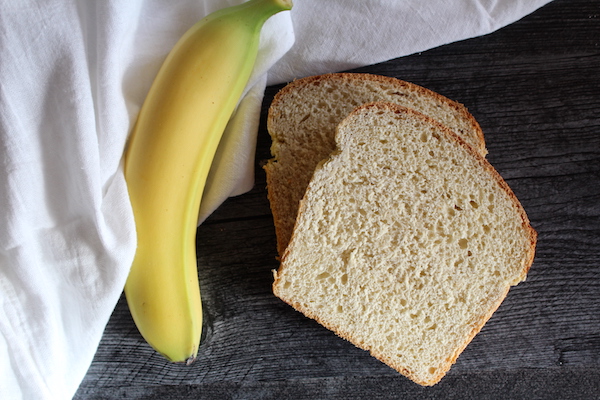 While your standard banana bread is basically a cake, this yeasted banana bread is actually a slightly sweet sandwich bread that’s spectacular as a classic PB&J.  Add a few sliced bananas and it’s out of this world!

The trick is, you need to know a thing or two about working with yeast breads… 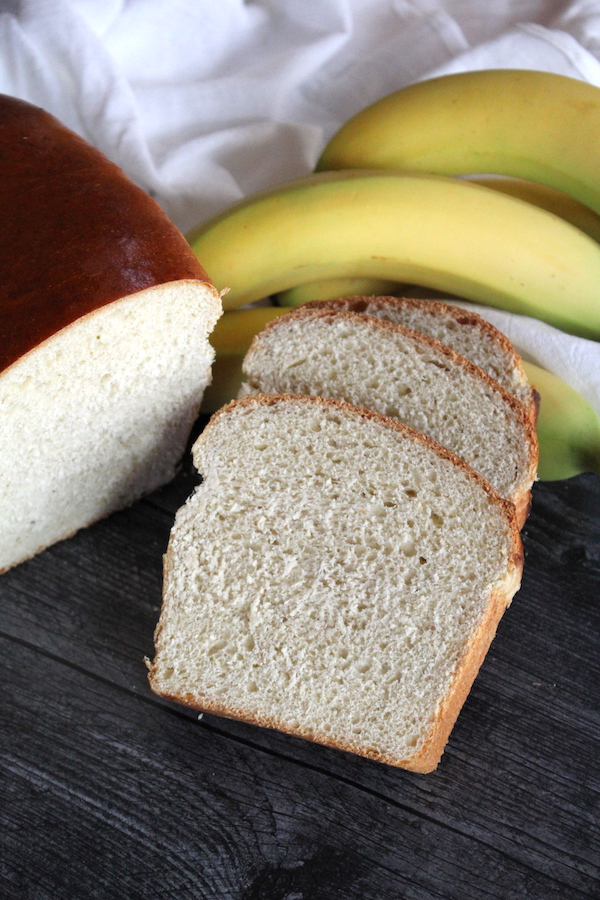 Most banana bread recipes include baking soda or baking powder as levening, but yeasted banana bread incorporates yeast (of course).  That means you’ll need to knead the bread to develop gluten, which helps yeasted bread rise.

If you’ve made an enriched sandwich bread before, yeasted banana bread isn’t all that much different.  Just make sure the bananas are really well mashed before starting.  The occasional chunk of banana is great in cake-like banana bread, but it’s less appealing in fluffy yeasted banana bread. 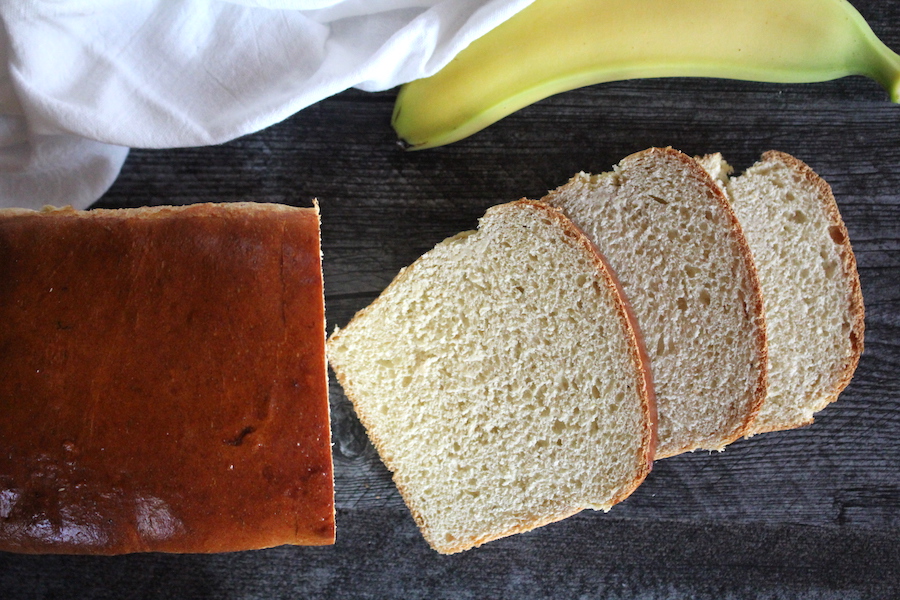 Dissolve the yeast in lukewarm milk for a few minutes, and then mix all the wet ingredients together until fully combined.  Add about half the flour and beat it together with the paddle attachment on your stand mixer (or a spoon by hand).

Switch to the dough hook (or turn the mixture out onto a well-floured counter) and then add the remaining flour.  Knead by hand for 8-10 minutes, or on in a mixer with a dough hook for 5-6 minutes.

At this point, the dough should be well-formed and cohesive, and just ever so slightly sticky. 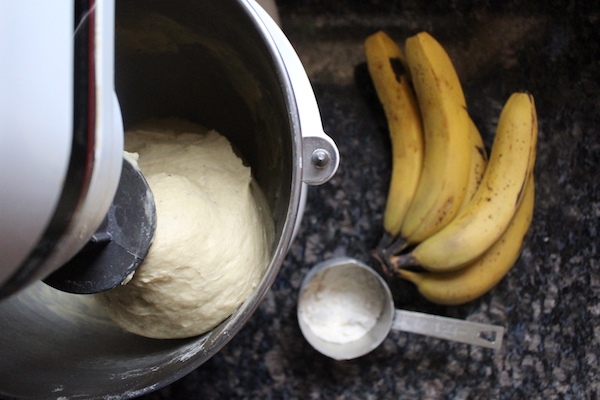 Place the dough in a greased bowl and allow it to rise in a warm place for about an hour until doubled in bulk.

Punch the dough down, divide in half and place in two greased loaf pans.  Allow the bread to rise again until it’s just up above the edge of the loaf pan.  This should take about 45 minutes to an hour.

Beat an egg with a small amount of water, then use that to brush the top of the loaves.  This is optional, but it really gives them a beautiful glaze.

I know it’s hard, but allow the bread to cool completely before cutting.  Or, if you have to, cut into one of them and eat it piping hot with butter.  That’s honestly what we did, and it was out of this world.  Another good reason to make a two loaf batch!

This recipe uses between 1/4 and 1/2 cup of sugar. I generally prefer just a very lightly sweetened loaf, so I use 1/4 cup and it makes the perfect sandwich bread. If you'd like a sweeter bread, go with 1/2 cup. 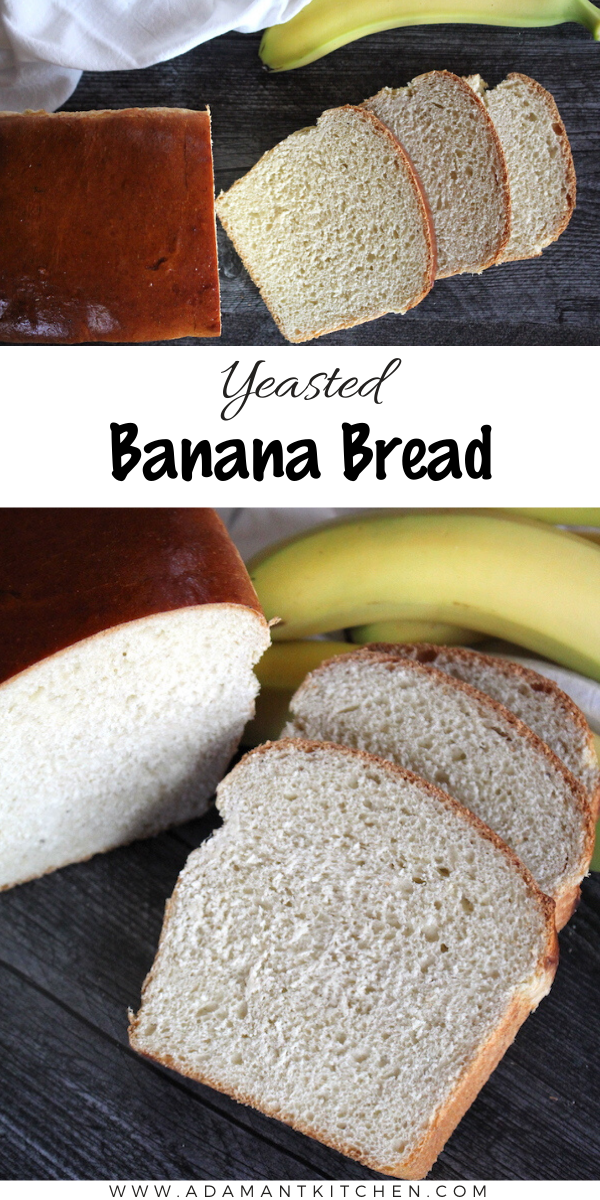