It seems like everyone loves brownie edges. The contrast of the crisp outside, with a tender chocolate-y inside, is the perfect match.  You don’t need a fancy brownie edge pan to get perfectly crisp brownies, just a hot, well-seasoned cast-iron skillet. 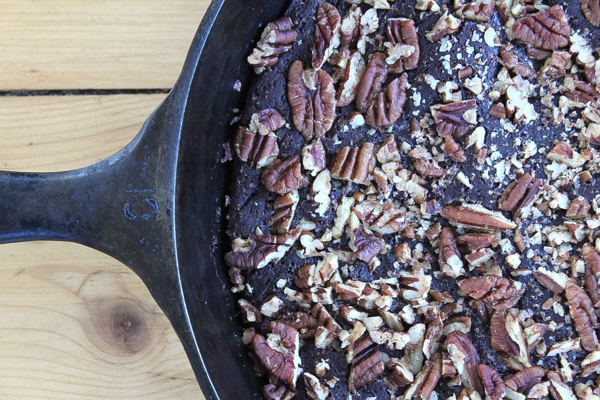 Using the same melted butter technique that produces perfect cornbread, heat the pan on the stovetop and toss in a full tablespoon of butter.  As soon as the butter melts, spoon in the brownie batter, top with nuts or whatever else you’d like and pop it into the oven quickly.

The hot pan will give you a crisp outer crust with a little bit of caramelization.  In a well-seasoned cast iron, you shouldn’t have any trouble with sticking. I keep a separate cast iron for my baking, and the only thing that ever touches its surface is butter the batter of cornbread, dutch baby pancakes, and cast iron cakes.

My favorite baking cast iron happens to be a no. 10 cast iron skillet (10 1/4 inches), but a smaller 9-inch pan will work just as well and make these brownies a bit thicker.  Anything bigger, like the giant 12-inch cast iron pans, will need to double the recipe.

Slightly undercooked brownies tend to be better than overcooked with brownies, so watch them closely.

Satisfy your sweet tooth with some of these dessert recipes!