Chestnut flour is a naturally sweet flour made from chestnuts.  It’s been a part of Italian cuisine for centuries, and it’s the perfect gluten-free flour substitute.  Learn how to make your own from wild foraged or store-bought chestnuts. 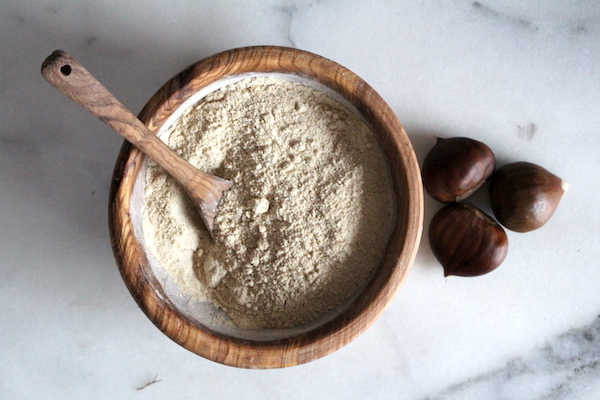 I’m always looking for ways to get more wild foods onto the table, and when I found wild chestnut trees locally I started searching for ways to incorporate their nutritious nuts into our diet.

Chestnut trees used to be a major part of the forests here in the Northeast, as well as in Europe.  In Italy, chestnuts were a major source of calories for Tuscan peasants, who turned them into dishes like chestnut soup or ate them roasted out of hand.  Fresh chestnuts aren’t nearly as useful or versatile as chestnut flour, and the majority of the crop was transformed into a naturally sweet wild foraged flour.

The resulting chestnut flour would keep for extended periods, and was used in all manner of traditional Italian bread and baked goods.   Many traditional Tuscan recipes require chestnut flour, and it lends a distinctive flavor to traditional chestnut pasta, gnocchi, crepes, polenta, and cakes.

Originally considered peasant food, used as a cheaper substitute for wheat flour, these days chestnut flour is part of haute cuisine.  Funny how times change.  Lobsters used to be reserved only for the poor, and now look how expensive they are.

Chestnut flour is almost impossible to find in stores, even fancy specialty stores.  I made a trip into the city and checked several stores, one that had literally 47 types of flour…and everyone looked at me like I had two heads when I asked for chestnut flour.

That leaves you with two options.  Buying chestnut flour online, or making your own from fresh whole chestnuts…

How to Make Chestnut Flour

Start with fresh, whole raw chestnuts in the shell.  Our local grocery stores carry these around the holidays, from early November through New Years.  You can also forage wild chestnuts from local trees, if you’re able to successfully identify them.

Chestnuts have really distinctive spiny casings around the nuts, so if you find one fruiting, it’s easy enough to spot… 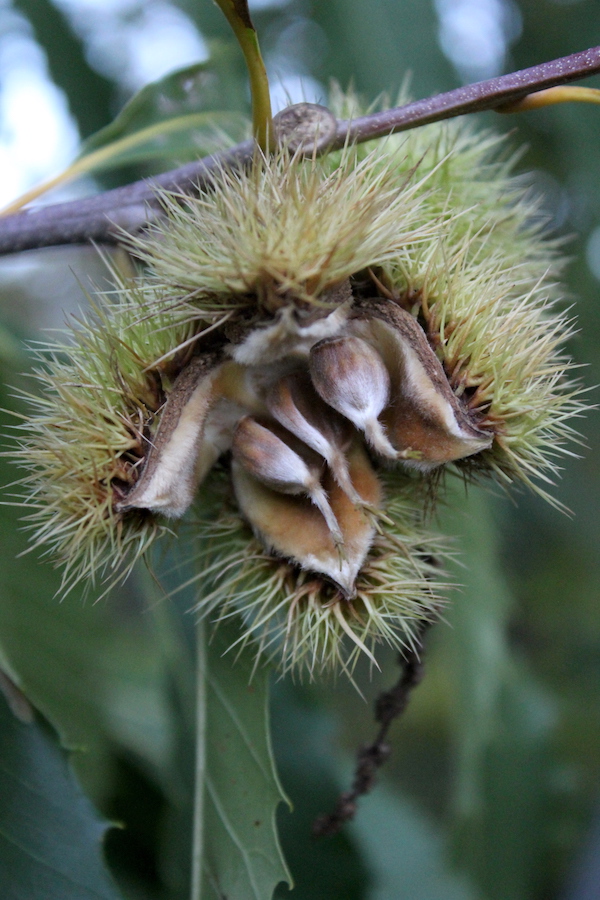 Keep in mind that the chestnuts are going to lose weight and volume during processing, once the shell is removed and the nut is dried into flour.  Be sure to start with an ample supply of fresh chestnuts, at least enough for your chosen recipe.

I found that one pound of raw chestnuts in the shell made about half a pound of finished chestnut flour (or roughly 3/4 cup).

Use a sharp knife to slice an “X” into the side of each chestnut.  Moisture needs a place to escape while they’re roasting, and the X pattern makes it easier to peel later. 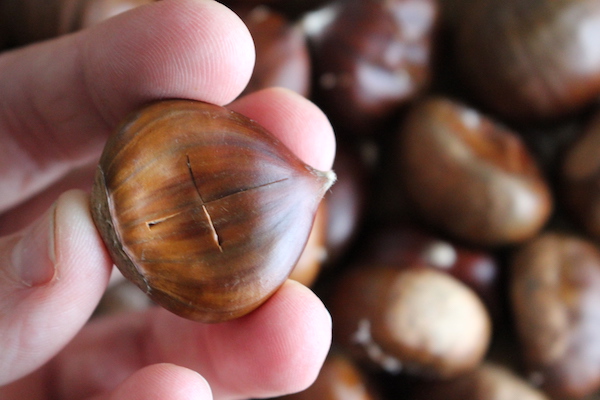 Slicing an “X” on the chestnuts before roasting them gives steam a way to escape, and makes them easier to peel.

The roasting helps dry out the chestnut meats, and makes it so you can easily peel off the outer shell.  It also greatly enhances their flavor.

Next step…peeling.  Chestnuts have two layers that must be peeled off, leaving the sweet inner meat.  The outer shell will have peeled back at the corners of the “X” you sliced originally, but the inner shell (or seed coat) will cling tight.

The inner shell is brittle, while nut inside is soft.  Press the chestnuts between the palms of your hands and the inner seed coat will shatter off.  Working while the nuts are warm helps with this, and if the seedcoats stop shattering off simply re-warm the nuts again. 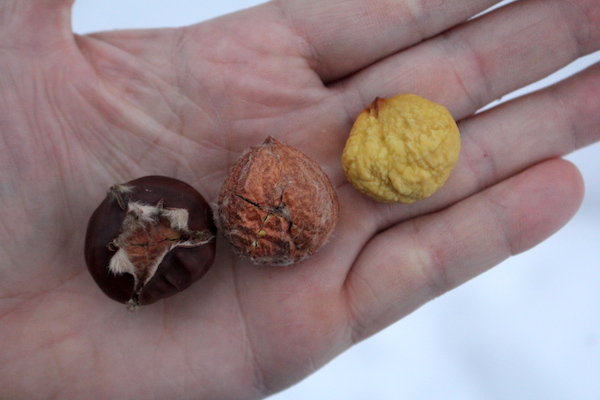 Chestnuts have two parts that must be peeled off, the outer shell and inner seed coat.

Once the chestnuts are fully peeled, and the bitter inner seed coats have been removed, it’s time to chop the chestnuts.  Chopping increases their surface area and makes it easier to dry them for flour.

Mince them finely with a knife, or place them into a food processor.

Spread the chopped chestnut pieces on a food dehydrator tray, and dehydrate at the lowest temperature setting (usually around 105 degrees F) for 12-24 hours (depending on the size of the pieces). 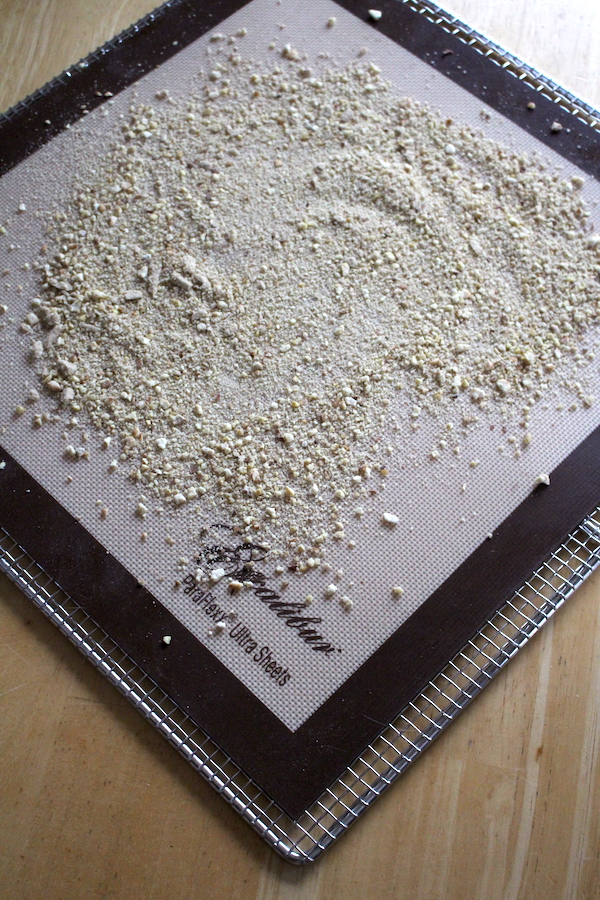 When the chestnut pieces are completely dry, process them in a food processor until you have a fine flour.  (Alternately, grind with a mortar and pestle, or get really old school and use a stone flour grinder.)

The finished chestnut flour, if properly dried, will last about 2 months in a sealed container at room temperature.  To increase the shelf life to 6-8 months, place the sealed container in the freezer. 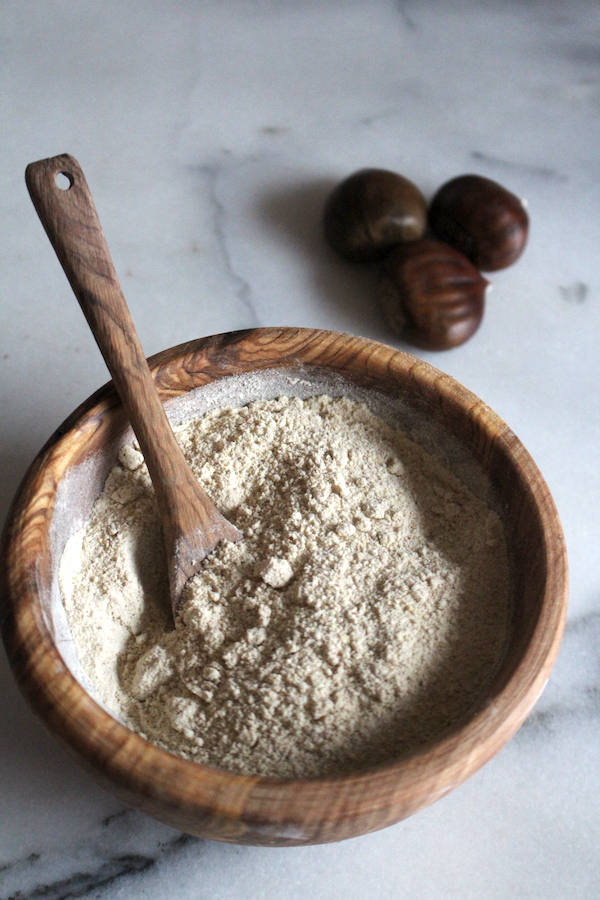 Starting with exactly one pound of chestnuts in the shell (or about 3 cups), I was able to make roughly 1/2 pound of finished chestnut flour (about 3/4 cup).  Three cups of chestnuts were roasted, which caused them to lose a significant amount of water weight (while gaining flavor).  Once shelled and diced, I was down to about 2 cups of minced chestnut meats.

The result was roughly 3/4 cup chestnut flour, and they’d lost about half their original weight in the shelling, roasting and dehydrating. 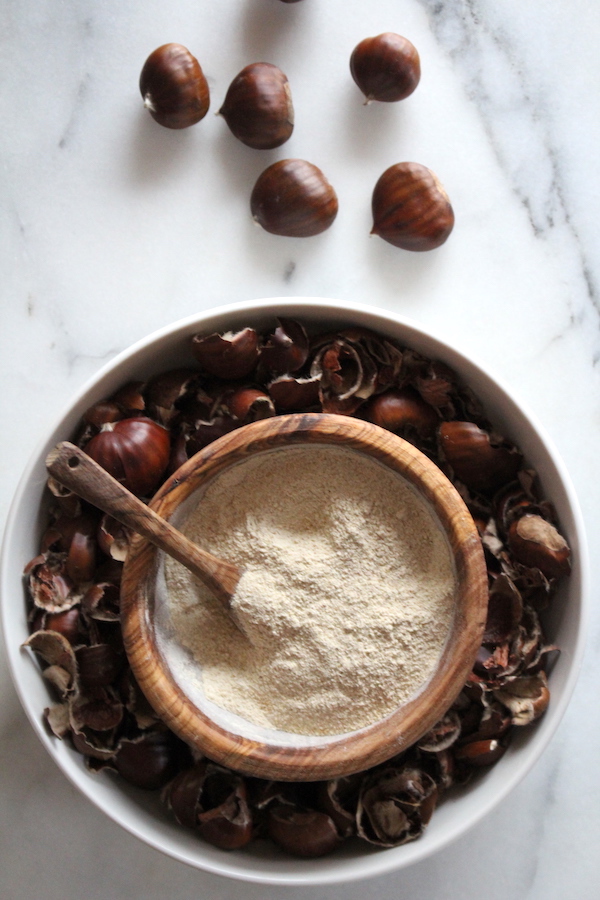 Perhaps the most famous chestnut flour recipe still in use is castagnaccio, or a simple chestnut cake made from chestnut flour, water and olive oil.

According to Great Italian Chefs, “Castagnaccio is probably the most representative recipe that is made with chestnut flour in Tuscany. It is a thin and crisp chestnut cake, an old sweet treat that tells of a time when poverty and hardship were resolved by housewives’ ingenuity. In its simplest version, it is enough to stir a handful of chestnut flour with water, olive oil and rosemary and bake it into a cake with a sharp, almost smoky flavour, with a thick texture similar to a bread pudding.

Talking about castagnaccio in Tuscany, however, might be a thorny issue, because each area uses different dried fruit or focuses on different nuances of flavors. Until recently, I always thought a combination of raisins and pine nuts was best, but now I prefer the castagnaccio of Garfagnana, where you can also find walnuts and the kick of orange zest, which adds a citrus note and turns the castagnaccio into a sweet treat with a typical Christmas flavor.”

While castagnaccio is best known in Tuscany, other regions of Italy have their own distinct variations. 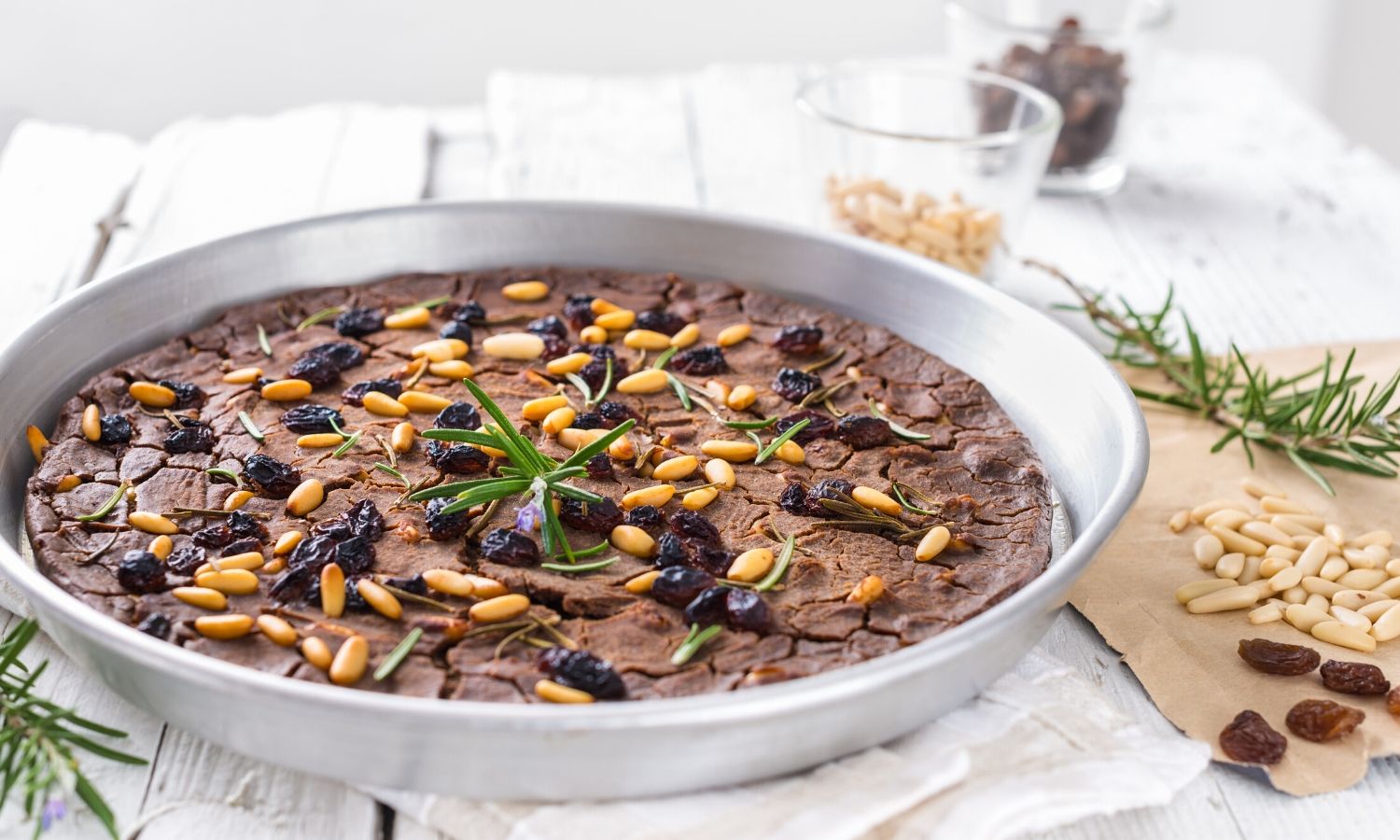 Beyond the traditional Italian ways to use chestnut flour, modern cooks have also come up with a number of creative uses.  Chestnut flour is popular with paleo dieters, hoping to find a grain-free flour substitute.  Likewise, since it’s naturally gluten-free, you can find it in recipes for celiac sufferers. 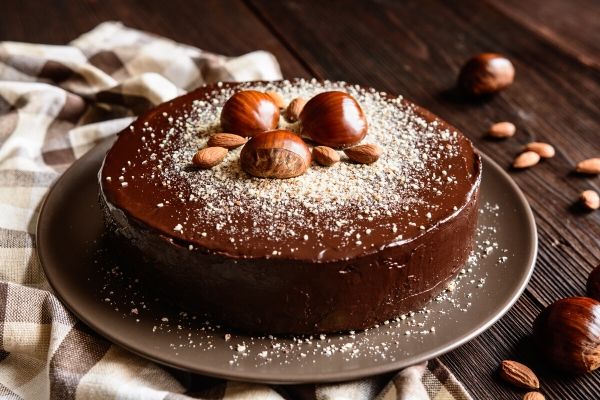 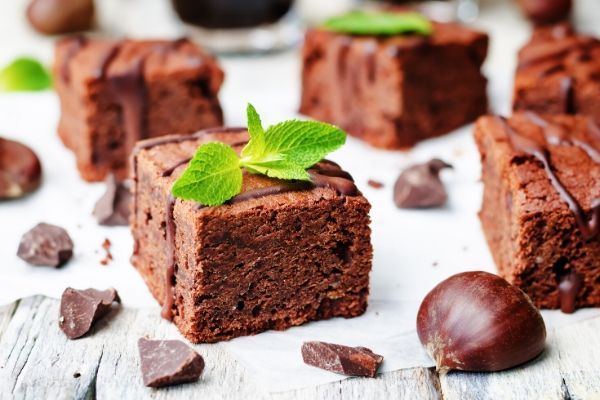 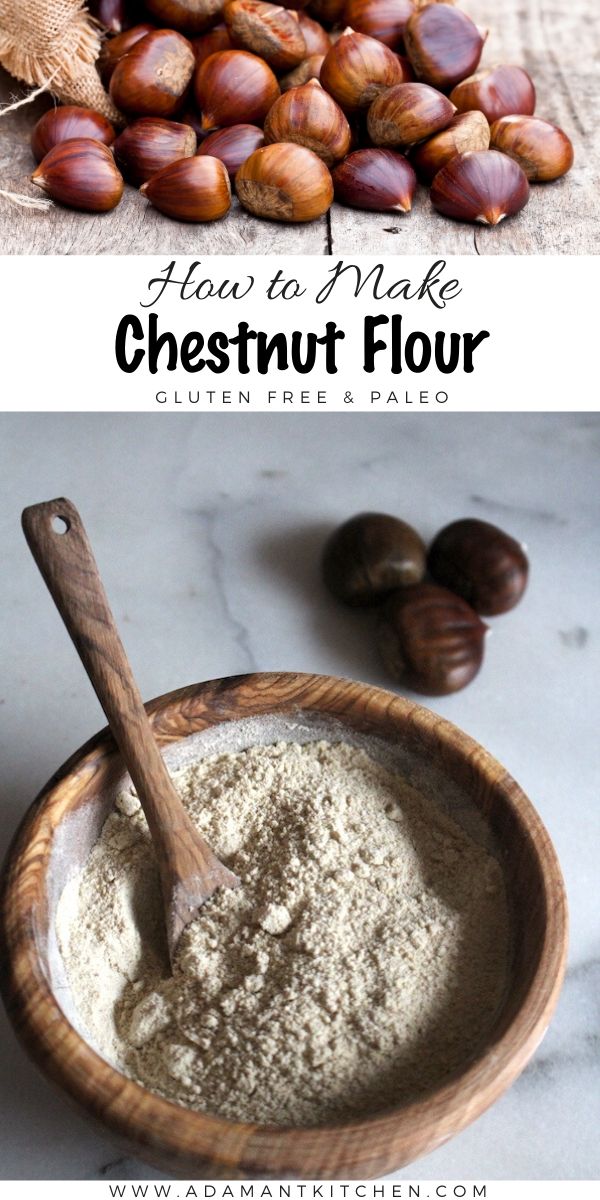